After Doctor Who ended, I stopped putting post-it notes on people, as they were starting to pay attention again, and went to play werewolf. 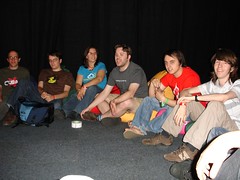 I did okay in the first game, although Natalie spotted that I was a wolf fairly early on. She also spotted one of the others. The second game I knew that Frankie was definitely a villager, but I wasn't sure about the others. Once I was disposed of, I saw that it was Frankie that was the wolf, and none of the others. Again, Natalie had spotted him. Derren Brown I am not. Great fun though.

I went to "bed" at around 3.00, where "bed" was a couple of bean bags. I got up at about 7.00 after waking up once or twice an hour. I went back to the table I spent most of yesterday, where a couple of the others had been up all night. 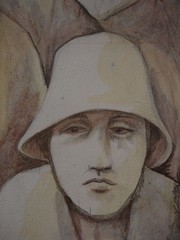 OK, I'm off to find breakfast.