A year in the life of a tech blogger

This year's been a good one. Here are the technical highlights*.

I hosted my fourth Sussex geek dinner in Uckfield.

Went to a London geek dinner, and won a trip to South by South West in Austin, Texas. Thanks again to Paul Boag, who pulled my name out of the hat.

Won a copy of Andy Budd's CSS Mastery. Great book, and saved me loads of time.

Went to SxSW. Had the most amazing time. Met some wonderful new people. learnt a whole load of useful (and useless) things. Got to explore somewhere I'd never been before. Went the furthest north, south and west I'd ever been on a single plane ride. Saw icebergs. Had fun with the word "plectrum". Met a couple of my heroes. Got inspired.

I also submitted a session proposal to speak at the third Developer Day (DDD), on the subject of MSBuild. My session wasn't voted for.

My name and blog url appeared in the appendix of Robert Scoble and Shel Israel's book, Naked Conversations. I was deliriously excited by this.

I bought a tablet PC. This has changed my life, and my family's lives too. My children use it to draw pictures, surf the web, learn how to write and play games. I use it to blog in bed, write code on the train, take notes in conferences and to allow Julia to get online while I'm coding.

Went to Developer Day 3, a free event held at Microsoft in Reading on a Saturday. Learnt some interesting things, met some new people, and got to know some other people better. Gave my tablet PC its first outing.

Went to a London Geek Dinner where Chris Anderson was the special guest.

Got a big spike in traffic after my SQL Server tips page got dugg, del.icio.used and meneamed (Spanish digg-like site) at the same time. Funny thing is, I didn't even write it!

I received my first cheque for $100 from Google Adsense, after about 18 months of having adverts on my site.

Went to two VBUG evening meetings, both about security.

Hosted a Sussex Geek Dinner in Brighton. It seems that there are many more geeks in Brighton than in Uckfield.

As it went down so well, I hosted another Sussex Geek Dinner in Brighton. These seem to be taking off now.

Started a new project with a complete stranger. I still haven't met him, but we exchange emails regularly, and think along similar lines.

Got the Ruby on Rails book as a birthday present, and have started learning how to use it. I absolutely love it, and I have another project brewing, which I'll start once I've finished the book.

Bought a cheap mp3 player on eBay to listen to podcasts to and from work. Scott Hanselman may not be as funny as Chris Moyles, but he's cleverer and doesn't play chart music.

He was so impressed with mine, that my Father-in-law bought his own tablet PC. He's a pastor, and can prepare his sermons on it without having to learn to type.

Went to the fourth Developer Day. They keep getting better. Again, I learnt some new things, and met some new people. The geek dinner afterwards was really good.

Things I've started to learn about this year

I've met loads of fabulous, clever, funny, inspirational, famous and interesting people this year. Here's a list of those that I remember right now. Some I've chatted too briefly and I'll never see again, some I'll email occasionally, some I'll bump into regularly, and one or two have become friends. 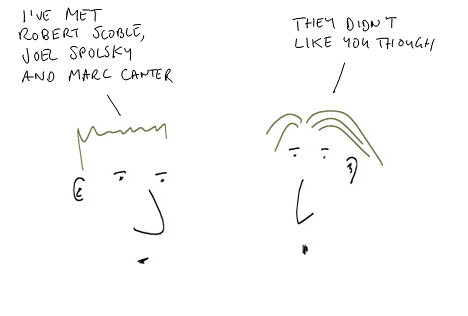 * There have been non-technical highlights too, but that's for a different sort of blog.