Another great London geek dinner, with special guest, Chris Anderson of Wired magazine, who created the long tail concept. There were about 90 guests in attendance, much more than expected, so the small room we were in got very hot, and we all went outside. Fortunately I sat near the front, so I could hear every word; those at the back weren't so lucky. I think everyone heard Ryan though!

The best quote of the night came right at the end: "Insurgency is the long tail of war". 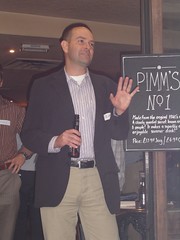 Tom Morris and Ian Forrester suggested that the next Sussex geek dinner should be in Brighton - Ian had the great idea of holding it at the same time as d.Construct. Good idea; I'll follow that up.

Big thanks to Ian for organising it. He puts so much effort into it. He didn't eat anything the whole evening, until after 10pm when he found a small bowl of feta cheese.

I took my tablet PC with me, as I went on the train. I've never used a laptop on a train before, and it's great. I'm writing this on the way back to Tunbridge Wells. When I get home, I'll post it. In the past, I couldn't start typing until I got home.