Firstly, free wine. Hugh agreed to sponsor this geek dinner by supplying us with Stormhoek. This time it was rosé, which went down well. I don't think I've had rosé before, but Peter had just come back from France, where he'd had plenty of it. He said it was fruitier than any other rosé he had drunk before. 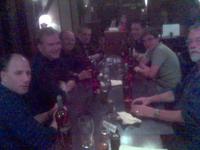 Secondly, more geeks. Two people I hadn't met before, including Mike, who runs an OPC website, and noticed my recent post on OPC and got in touch. There were a few process control geeks present, so there was some double geekiness going on. Apparently LAUNCHcast interferes with serial ports when trying to talk to theodolites.

Thirdly, cracking passwords. One guy said that in his company only one user has a password, and it turned out to be my next door neighbour. My first guess was the name of his (much-adored) dog, and I was correct!

Fourthly, old computers. Until today, I had never heard of an Oric, and this morning someone at work told me they had one, and tonight Andy says he's still got his.

Someone asked me why I started organising geek dinners. Because my wife just doesn't understand me...

Anyway, it was another relaxed, fun, sociable evening. Hopefully there'll be another one before Christmas.