Something other than software

I try to keep this blog to the point, which is basically software. I've digressed a couple of times, and I'm going to again now. If your only interest in my writing is my "insightful" insights into my experiences with software and working with software, then feel free to move on, as this post is about wine.

OK, so I don't know who most of my readers are, but I have around 30 subscribers in Bloglines and NewsGator combined, and some casual visitors. I'll assume that some readers haven't come across Hugh Macleod, as we write about different subjects. From what I can gather, Hugh used to be involved with big-bucks advertising, then realised it was rubbish, and is now into small-bucks "advertising". Anyway, read his stuff; it's more interesting than mine.

Recently, Hugh has been promoting Stormhoek, a wine company. Instead of sponsoring mainstream American comedy shows, Hugh thought it would be cheaper to just send a sample bottle to a bunch of UK bloggers, and hope that they would write about it. So I signed up, and got through the post a bottle of wine with my name on it: 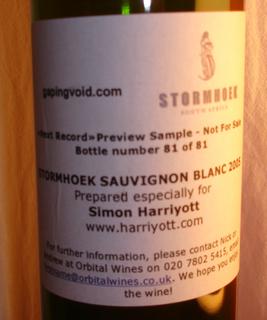 On Friday, I shared the wine with my wife, my brother-in-law and his fiancee, and we all liked it. The wine is marketed as "fresh", and in my limited knowledge of wine, the word "fresh" does seem appropriate. I generally prefer red wine to white, and I have a couple of "safe" reds that I know I'll like, and usually buy. I'll try other bottles quite often, to see if there's other wines I prefer: I don't drink that much, so I sometimes forget which of the recent wines I liked the best.

I don't have a "safe" white wine yet, as red is safer than white for me. However, I liked the Stormhoek, and so did the others, so I'll make it my safe white for now. As there's an interesting (to me) story behind it, it may be handy for dinner party conversation too. I won't forget what it's called, as Hugh mentions it in his blog often enough that the name has sunk in.

For a while, I considered not writing about the wine, as this is a software blog, and writing about it wasn't a condition of receiving it. Two things changed my mind. Firstly, being sent a free bottle of wine (with my name on it) is a nice thing to happen, so I'd like to do the nice thing in return, which means writing about what I thought of it. Actually, that's reason enough.