We attempted going on holiday to Devon today. Packed up the car and everything, stopped for lunch on the way. About 5 miles from Devon, the car broke down. Seems like some kind of hardware fault, which I don't really understand, as I'm a software guy. Anyway, there's this thing at the front of the car called an engine (a bit like a CPU, from what I understand), and it crashed, and won't reboot. Might have to get another one.

So we were towed home. 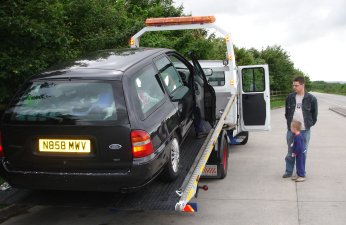 Twelve hours after we left, we arrived home again. We're going to try again tomorrow in the other car, which is loads smaller. We've optimised the luggage, so we're leaving behind one suitcase, a guitar, all food, and most of the clothes.

Superbowl advertising
If you don't ask...